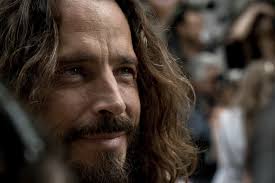 It’s taken me what I consider a shamefully long time to put together some thoughts about Chris Cornell’s death in May. I awoke that morning to my husband gently telling me that Chris had killed himself the night before and immediately leapt out of bed to stream my hometown radio station, KEXP. In the shock of this terribly sad piece of news, I was transported back to April, 1994, when word came over the kitchen radio that a dead man who appeared to be in his late twenties had been found above Kurt Cobain‘s garage. Losing brilliant artists to suicide or drug overdoses or a combination of both is a devastating epidemic turned legacy of Seattle, my hometown. Andy Wood. Stefanie Sargent. Kristen Pfaff. Layne Staley. Mike Starr. Kurt himself. Hearing the news about Chris made me ache to be home, under chilly grey skies and dark Evergreen trees, so I did the next best thing–wrapped myself in flannel and turned up the radio.

As I listened to the morning DJ remember Chris in quiet, subdued tones, talking about depression and suicide and urging listeners to reach out, to care for one another, I stood at my desk in dazed silence. KEXP played Soundgarden and Audioslave and Temple of the Dog and any and all solo and collaborative works in which Chris was involved, for twelve hours straight. DJs talked about their memories of Chris, so many of which occurred during the formative years of the Seattle Grunge scene, the formative years of my young adulthood. Of course, I was too young in the early 90’s to be in the rock clubs, thus most of my consumption of the “Seattle Sound” happened in my bedroom over a double tape deck boom box. The stories of Chris’ extraordinary voice (which ranged across four octaves, by the way) bursting onto the scene, forever penetrating our collective consciousness carried me from my home office in Phoenix to the PNW, and I could almost feel the cool air on my face, plastic baby barrettes in my hair, the weight of my first major depressive episode, the release Soundgarden’s music provided.

You see, I thought Chris had made it through the danger zone, and would be here until the end of time. I thought because he was in his fifties, in recovery from alcoholism, with a wife and children, and a music career spanning decades and several projects, any of which he could revive and tour with to great success, that he had made it. That he had thrown off the shackles of youthful angst and addiction and risk and the special existential darkness only those who grow up in the PNW can truly understand. His Andy had died of the 90’s heroin plague (which, of course has never really ended and is in a massive resurgence). So had various of their other musical colleagues, almost in rapid succession. Mia Zapata was murdered one night while walking home. Kurt Cobain shot himself with a lethal dose of heroin and a shotgun. And when things began to quiet down and we reached the 2000s, and those who made it out of their twenties were still alive, Layne Staley succumbed to his lifelong heroin addition, alone, alienated, and in absolute isolation in his home at age thirty-five.

They’re dropping like flies, one of our neighbors remarked a few months after Kurt’s suicide, when Kristen Pfaff was found dead of a heroin overdose in her apartment. I remember imploding with anger over his comment, my fourteen year-old self flying into a rage at what I saw as an attempt to make light of the epidemic. Looking back, I see now how shaken he was, a contemporary of these tragic stars, walking the same streets and frequenting the same clubs and breathing the same air, that seemed to be cursed up in our dark, misty corner of the world. Had I been a little older, I would have been badly shaken too, in a very different way than I was as an eighth grader. What I felt then was the pain of losing artistic deities, a row of empty pedestals, stars collapsing in the night sky. I could not grasp with my young mind that these were actual people, young people who were irrevocably addicted, vulnerable, and deeply enmeshed in a scene that seemed to tear them apart and crush them out of existence. It could happen to any of us. It was happening to many of us. We were dropping like flies in my hometown.

The spring that Kurt Cobain killed himself comes back to me in scenes easily recalled; one of the most influential and tragic times of my life, preserved across my senses. A washed out sky. Clouds so high and uniform they create an unbroken light grey dome above. A dulcet spring sunlight, illuminating the dark spaces where a crushing grief has taken hold. Cool air. Gentle, misty rains. Flowers bursting forth in vibrant, saturated hues. Tiny white butterflies flitting through the air, alighting here and there. My second-hand wardrobe, washed down to an essential softness, ragged and hole-y against my skin. The stiffness of black high-top Converse All-Stars, grubby and tattooed with song lyrics. The smell of fresh cut grass and the marine layer, drifting in from Puget Sound. And the music. Oh, the music.

I felt like a baby widow that spring, having come so close to losing my spiritual soul mate to an overdose in March, and losing him entirely to suicide one month later. My classmates treated me with a deferential respect–checking in to see how I was coping, even the kids who treated me life shit for being different, a “grunger” in a sea of preps, called my house when the news broke of Kurt’s death, to offer condolences. My grief was all-encompassing and untouchable. No one could understand. Except the music. Soundgarden’s Superunknown was released during this season of devastation, and became an essential part of the soundtrack. A sign that life was going on, that music wasn’t dead, the Seattle Sound still alive.

I saw Soundgarden that summer at Memorial Stadium in Seattle, a WWII vintage open-air concrete affair used mainly for professional soccer matches and high school football games. It was a warm August day, and I found myself awash in my tribe, the Big Kids, the cool adults that loved the same music as I. I was home. What I remember most about that show was the absolute professionalism the band exhibited onstage, and how they sounded almost exactly live the way they did on their records. This was the era of stage-diving and staggering around black-out wasted and smashing one’s instruments to smithereens during the encore, and Chris and his bandmates indulged themselves in none of this adolescent acting-out. They stood before us, consummate pros, playing the new jams, the hits, the rarities, deeply rooted to their places. It was comforting. That in a sea of drugs and death and chaos a band could take their marks and play on. That was my impression of Chris–a person who took himself, his artistry and his work seriously. That he was less concerned with projecting the insouciant recklessness that was the hallmark of the times, and more concerned with delivering a musical experience that was about, well, the music. I bought a shirt. I kept the yellow wristband on for weeks after.

This is why Chris’ death so shocked and saddened me. Because he seemed like a mature adult, educated, above the fray to which many of his peers ultimately succumbed. How ignorant we are of the struggles of the people we feel we know well, because of the parts of their souls they share with us via their art. It was all there, I realize now. As I listened to his expansive catalogue the days after his death, it was clear. Nearly all of his songs express deep, existential pain. Feeling dead. Inability to connect. Isolation. Loss. Waiting for something that never comes. It was all right there, decades of darkness made into marvelous music that shaped an era. At the beginning he didn’t know he could sing! He did not know the power and range of that voice he immortalized across projects; I feel his own words resonate inside as I begin to fathom the loss: no one sings like you anymore. Reading the reports that have come out since the day of his death have made clear that Chris was a man who struggled with severe anxiety, depression and addiction all his life. I wanted him to be past the crisis years, into a safe, kind, comfortable middle age. I didn’t want him to recede into the dark, tortured, final legacy that my hometown perpetrates.

My high school best friend won tickets to see Soundgarden from a radio station, a coup for which she had an extraordinary knack. We were sixteen now, high school juniors, and things were getting a little better. We could drive, and we understood ourselves a smidge more, and we’d been around the block with depression a few times and knew what to expect. We were growing into young adults. It was December, and Soundgarden was playing indoors that night at the Mercer Arena, after postponing a week due to Chris’ laryngitis (and how he wasn’t afflicted with that after every show of his life is another testament to his vocal exceptionalism). We sat high in the stands, looking down over the stage as this group of experienced pros took their places and began to fill that low, squat concrete structure with their remarkable sound.

I want to remember Chris the way he was that night, when he stepped forward to the front of the stage to perform Black Hole Sun solo, for us. His bandmates faded into the darkness as Chris stood, bathed in blazing red and orange lights, periodically softened with dazzling gold beams, spinning and rotating across his being. One guitar; a singular, matchless voice breathing new life into a song we’d heard exactly one million times, elevating it from an over-played hit into a spiritual. Spiritual is the only way I can describe how I felt as he implored the dark, elusive sun we PNW people love to hate to deliver us from suffering. As he gazed out over the room mid-song with his sorrowful, pleading eyes, I felt a rush of possibility inside me, an expansiveness created by his presence and his voice and his guitar and the lights and the darkness and the age all combined and I believed in that moment that anything I wished for could be mine, through him.