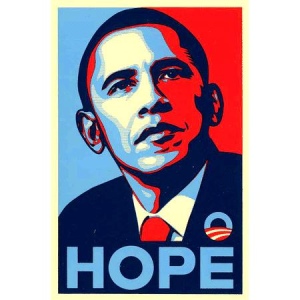 Watching Barack Obama’s farewell speech this week was an emotional experience, and I found myself crying, don’t leave! at the TV over and over, as he made critical and sensitive point after point in his signature way. I struggle to find the right words to describe the gratitude and privilege I feel to have had him as my president after enduring eight years of inarticulate, knuckle-dragging W. (to say nothing of his policies) as I came of age.

The first time I saw Barack he was the junior senator from Illinois speaking at the 2004 DNC. I remember sitting on my parents’ couch in Athens, Georgia, straightening up and leaning forward as he mesmerized me with his oratory brilliance. Who was this guy? And then he rode in on a unicorn in 2008, offering me the hope and inspiration I so desperately sought.

When Barack declared his candidacy with a message of tolerance. decency, hope, and change, he spoke directly to me. By election season 2008, I’d been chronically under-employed with a master’s degree for two years, was racking up terrifying levels of credit card debt to make ends meet, had fallen off the wagon, and was feeling as uncertain and angry and disaffected as ever. He spoke directly to me, talking about the need for opportunities for people to join the middle class, about the need to heal a fragmented country, to include everyone so we could effect our best as a nation. I was on board. I was inspired. He was young. Accomplished. Articulate. Positive. Black. He got what I was going through, and a vote for him was a vote for progress, a vote to improve my circumstances. And it helped that he was totally hot.

I trusted Barack so much the past eight years, I must admit I often tuned out and let him do the job to which I elected him. He didn’t fail me. He called out groups whose existence had never been positively recognized by a president–the disabled, LGBTQ folks, immigrants–during his acceptance speech. He surveyed the crowd, picked us out and called us by name. He shared his personal vision of America, a country of decent, hardworking people whose tolerance, when called upon, would embrace the populace and allow us to rise together. He believed in us. He put stars in my eyes.

One Sunday in May, my dad and I hiked through a large public park in Seattle, marveling at the news of Osama bin Laden’s execution at the hands of our Navy Seals, in a hit brilliantly orchestrated and commanded by Barack and his military. The September 11th attacks receded into history year after year, and after a decade it felt like bin Laden would never be caught. That he’d disappeared completely into the landscape, just another perceived miss for which Congressional Republicans would taunt Obama. But no. Barack had done it at last, avenged our attacks, so there!

After three years of watching the Affordable Care Act be duked out in Congress and the news, my husband began to grow despondent that it would ever come to fruition. But my faith in my president was so strong, I told him not to worry, that Obama was committed to this paramount piece of legislation, that it would be done. And when the news came that the Supreme Court upheld the decision, I likened Barack to a man whose baby has fallen into the deep end of a pool. He dives in with his clothes on, swims to the bottom, scoops up the child, breaks the surface and starts it breathing again with artificial resuscitation. No sweat.

I once watched a clip of Barack awarding the medal of honor to a soldier who served in Afghanistan, his poise and grace of a piece with the honoree’s dignity and grave respect. I felt chills at the moment the medal was affixed around the soldier’s neck, the gentle, reverent way Barack’s fingers moved, the silence of the room dense with anticipation. I watched it again and again, searching for it years later to review it again. The daughter of a civilian family, I did not share the bone-deep patriotism of my husband, a soldier’s son. But watching our commander in chief confer a high honor on one of our distinguished warriors brought me closer to understanding. Barack had gravitas.

The night of the 2008 election was epic. I lived in a liberal city in a blue state in the upper left of the USA. We had Barack fever. Everywhere you turned Shepard Fairey’s Obama graced tee-shirts, bumper stickers, sidewalks, the sides of buildings, storefronts and home windows. He was so popular I joked he should design his own fragrance; “Yes We Can” scented on the air. I walked down to my polling station that November Tuesday, thrilled to wait in line on the community college campus, to mark the bubble next to “Obama”, to elect our first black president. That night we went to a party up the street at a friend’s. We suffered through the late afternoon pundits and their buzzy topics, “guns, god, and gays”, ready for the moment Barack was declared our new man.

Ebullient and tipsy on champagne that flowed early that evening, the party streamed out onto the street, joining swarms of people, coming from all directions. We were laughing and hugging and screaming and crying and dancing and chanting “MANDATE! MANDATE! MANDATE!”. Soon hundreds of people covered the main drag of our neighborhood and every few minutes someone would scream, “OBAMA!” and set everyone to cheering again. W. was over! The McCain/Palin sideshow was roundly defeated! We had a black president! I saw my parents’ car cruising slowly in the line of traffic, holding people eager to join the festivities. I ran to the driver’s side window, and hoisted myself halfway inside, surprising my dad, shouting “Obama, fuck yeah!” into the car. OK, I was more than tipsy. He and my mom looked delighted, nonetheless. I spun around and launched myself into the arms of a different friend who worked in the neighborhood. He swept me up and swung me around with joy. We were out for hours, marching up and down the street and sidewalk, making new friends everywhere, inside the joyous crush celebrating our glorious new president. I screamed my voice into a hoarse rasp that lasted two weeks. It was worth it.

By Inauguration Day 2008, my life was a shambles. I knew for sure I had a terrible alcohol problem that wasn’t in my control, my marriage was failing, my friendships fragmenting, my debt increasing, in the middle of an emotional affair with a man on the East Coast. When I wasn’t drunk and acting out, I was hungover, sick and contrite. And in either of those states you could always find me texting, calling, emailing, fb messaging or g-chatting the East Coast Man for emotional succor.  ECM lived in DC, to be exact, and so we spent that day with me in front of the TV, him live-texting me from the city, where he was too hungover and depressed from a whisky binge the night before to go out and participate. We were together for the big moment, and that was what mattered. But I remember being paranoid someone might take a shot a Barack that day, believing darkly (in an extension of my overall nihilistic mood) his election too good to be true. I worried about his exposed head all through the proceedings. The sight of little Sasha on the box Barack guided her toward so she could stand and see cheered me considerably.

I sat at my desk at work one day that January with a pounding hangover, the flu-like symptoms beginning their slow creep, feeling like a piece of human wreckage. Everything in my life was screwed up beyond belief, and yet I could not and would not stop my reckless course of action. I was hopeless! And as I hung  my head in shame, a snatch of the music I streamed through my computer speakers pierced my negative reverie, the world is such a wonderful place, the world is such a wonderful place, and I saw Barack in my mind, knew he was in control and had a plan and agreed completely with the lyric, my face breaking into a smile. Sounds downright religious, doesn’t it?

Two nights ago, at the conclusion of Barack Obama’s final speech as our president, I went into the other room to rummage around for a forgotten item. So touched was I by his loving words to his wife Michelle and their daughters, I was reminded. I flashed back to that freezing January day when my life was a confusing mess, and the sight of the new First Family brought me out of it for a comforting moment. I saw Barack in his black topcoat, grinning from ear to ear, holding Michelle’s hand as they walked in front of their motorcade. I remembered Michelle’s fabulous beaded yellow coat, her green leather gloved hand waving to us. I saw Sasha all bundled up in pink and orange, her missing-toothed smile. Malia, the exceptionally poised young lady in brilliant peacock blue. I had that image somewhere, oh yes, here it was, folded and yellowing. The front page of the Seattle Times featuring a picture of the First Family during the swearing in, all breaking smiles like sunrise and the headline above them, “Hope Over Fear”.

I”m going to have it framed and display it prominently to remind me these next four years, when perhaps Barack’s words will resound more powerfully than ever, hope over fear.