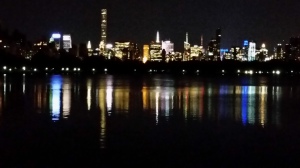 I spent the better part of last week in New York City, a very special place I consider my spiritual home. About five years ago I made a decision I wanted to try to get there annually, until I can find a way to spend a season there (life goals). Years before that, I went there the first time as a wide-eyed 24 year-old and it grabbed a hold of me, frozen early-March weather notwithstanding. My first awareness of New York came straight from the Daryl Hannah/Tom Hanks Little Mermaid-inspired (the HCA fairytale, not Disney) romance Splash, set in early-80’s Manhattan. And of course the film where The Muppets take it.

New York loomed large in my imagination, the American center of grit and cool, of massive proportions. A glittering, guttering beacon a little girl from a tiny fishing village like Seattle would lose herself. They had everything there. And everyone. New York City was clearly the cradle of civilization and a state of exalted humanity, all at once. It was intimidating. It was terrifying. It was alluring.

I have to tell you I’m surprised the City took hold of me the way it did, wending its way to my center, energizing my being. It makes sense that an extreme extrovert would find spending tireless hours hauling ass up and down its avenues awash in humanity invigorating. I come home with a buzz that lasts months. I go in the summer months and embrace the heat and humidity, the sultry (if you’ll allow it) nights. I step out early in the morning and stay in motion until late at night. I walk and ride until I’m limp and I can barely lift a foot up over the curb. I get up the next day and do it all over again. It’s how I connect with the energy of the place and recharge my better self. The person who aspires to a New York attitude.

But when my spiritual home was attacked in 2001, it wasn’t my spiritual home, and I felt no affinity or empathy or personal injury. I felt nothing at all, and isn’t that a shame? I was in a depressive episode entering its fourth year; ennui and existential numbness were my modes of being. I had no feeling toward anything or anyone, so shut down was I. Thinking back, a trip to New York could have cured me of that, the ultimate remedy for a severe case of the blahs. I’m so ashamed of my non-reaction I’ve not yet headed downtown to see the 9/11 Memorial or Museum. I think of all the City’s given me, just for me showing up within its borders, and I can’t apologize enough for my previous cold detachment.

I’ve expressed quite enough in previous posts my sense of being an outsider, apart from others. As someone who’s skeptical of groups, resists authority, and eschews the status quo, it’s pretty obvious I’m going to continue to find myself on the margins. A lone wolf, I’ve become comfortable out there, if periodically lonely. My extroversion propels me toward the pack when I need interaction, they take me in, and it’s a system that mostly works. Actually, it’s the best system I’ve tried so far. In New York, though, I feel smack-dab in the center of everyone, flowing through the crowd with harried ease, inside, together.

It feels so good to roam the center of the social bulls-eye, in fact, that I can hardly go in when I’m there. Never am I more antsy to get out and hit the streets, ready to walk miles under a blazing sun, chasing long shadows, passing people and moving from an ethos of pure efficiency. I do not want to stop. I do not want to sit down. I want to run and race and move. I want to vibrate inside the buzz of humanity, to fully absorb it. It’s absolutely manic and it gets me high.

Somewhere in the middle of my fifth visit, last week, I got tired. I felt sweaty and wilted and grossed out. I wanted to see what was inside, to pause and take in art, focus long enough to consider it. I wanted to sprawl out under the leaves, to kick back on a park bench and watch the fishbowl. I wanted to sit inside a restaurant and talk for hours. I chose less-crowded streets, where I could move at a pace conducive with looking up and around, taking it in. Am I getting old? Nah. Am I less desperate for motion and stimulation? Yes. Understanding I have a five year track record of keeping my promise to myself of laying eyes on the City every year changed the dynamic. I’ll be back, so what’s the rush?

The last night of the trip, my male companion and my final act was a late walk through Central Park. We’d walked close to 50 miles in four days by then, and he’d been operating with blisters the size of New Jersey on each foot. We marched up from our hotel on West 48th Street to the Reservoir, where we stopped to lean on the railing, enjoying the wavering multi-colored reflections of Mid-Town on the black water. We strolled on to the Eastern edge, wearily lowering ourselves onto benches overlooking a gravel path and a clutch of waste baskets. Slowly the little brown rats began to emerge, rustling out of the brush behind us, scampering over the path, directly into the cans, food time! We counted ten before our biological revulsion toward vermin kicked in and we pressed on, out into the street. My male companion looked up at the street sign, resignedly giving voice to a tired desperation we both felt, East 90th Street, huh? We can get a cab, I offered, knowing full well we were utterly determined to see the walk through.

We staggered down the bumpy, broken cobblestones that made up the sidewalk along Fifth Avenue, as it stretched out alongside The Park. My tender, used-up feet registered each deformed brick as a stab against its sole. I looked down and tried to revel in the history of this public walk, thinking of Edith Wharton’s New York. I thought of how much grittier and grosser it must have been at the turn of the 19th century–heavily polluted air, and mud and horseshit passing for streets. Ugh. I was moving forward in a purely physical sense–an object in motion tends to stay in motion. How do New Yorkers stand it, I wondered? And as I contemplated being ground down by big urban life, I began to hear crickets. Just a couple at first, until they were so loud I could have been sitting on my grandparents’ porch in rural outer Atlanta. I peered into the leafy darkness of The Park to my right and saw no one. I marveled that in a place as grand and noisy and raucous and overwrought with human life as New York you could find a place to hear night insects. What a restorative treat!

In fact we passed only a small handful of people while we listened to the crickets, enjoying a quiet (if exhausted) walk, the sidewalks ours until we hit The Plaza. There we were engulfed in a Pokemon-chasing crowd, and we limped past as quickly as possible. As a treat for dealing with the crush, for pushing ourselves so hard, we grabbed slices and and an ice cream bar (for me) before we flung ourselves onto the hotel bed and picnicked there. Outside the rats scampered and the crickets sang, forty blocks uptown, refusing to relocate outta the way.