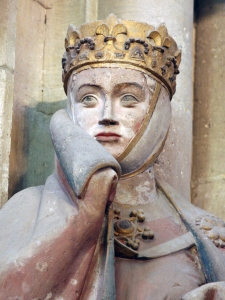 On our most recent girls’ nights, my buddies and I decided to re-watch some of the Disney classics (both the 1950s and 1990s era) to see how they hold up in modern times. We selected “Sleeping Beauty” (1959) for our most recent hang out and snuggled into the couch under blankets like six year-olds. None of us had seen this particular movie since we were very young, and we were eager to see how it played to our adult sensibilities. Would we long to be princesses?

By the end of the movie, I felt a stronger connection to Maleficent, the evil fairy than I did to Aurora, the title princess. I remembered then that I had always found Maleficent captivating, even as a child. And why wouldn’t I, when she holds all the power while Aurora/Briar Rose has no personality and makes no choices of her own?

Clearly children had far more patience in the 1950s than they (or let’s face it, adults) have now, as immediately evidenced by the opening credits–a five minute scroll of names across a still background, with a musical chorus that sounds like a funeral dirge. None of us could imagine a children’s movie showing credits first, or at least without upbeat pop music and characters moving about all over the screen. We sat through them, each of us gazing down into our phones, waiting for something to happen, the show to begin.

Ten minutes into the story, it’s clear the royal female characters won’t be given much personality or control over their destinies. The queen doesn’t even have a name, introduced instead as “King Stefan’s Wife”, ugh. Baby Princess Aurora is betrothed to her dad’s best friend’s son, a boy several years older, essentially so the kings can continue to be BFFs. Later, there’s a long scene where the kings are getting shitfaced drunk and celebrating the uniting of their kingdoms through the arranged marriage. Gross.

The three good fairies, Flora, Fauna, and Merriweather are benevolent and kind, to be certain, but when it comes time to bless baby Aurora with magical gifts, their choices are lacking in real world applications. I found myself offended by their bestowment of beauty and song, as though these are the most important qualities a girl could hope to have. I’ll allow that the fairies likely assumed that a royal child whose future has been predetermined and is therefore secure wouldn’t need more than such pieces of fluff. (I’ll also allow that it’s an animated children’s film from the 50s and maybe I need to not read too much into it).

Suddenly, in a burst of flame, the evil fairy Maleficent appears, stunning everyone into a frightened silence, irked that she hasn’t received an invite to the baby’s party.

This is where she becomes my role model, confidently crashing the party and directly questioning the hosts as to why she wasn’t invited, strong in her stance, eye contact, and body posture. The nameless queen sits on her throne stuttering while the good fairies anxiously wring their hands. She puts a teenage death curse on the child, which is shitty, but still. She’s the only woman in the castle with any kind of resolve, commanding the attention of the entire room. Why couldn’t the queen have stood up and faced her down, explaining just as directly why Maleficent wasn’t invited, and asking her to leave?

And the good fairies have blown two of their three gifts on useless things, with just about zero real-world value, given the terrible new circumstances. What if they had blessed her with strength and resourcefulness? Or intelligence and cleverness? A pretty face and set of pipes aren’t going to help cheat death. And if the baby princess was as celebrated, adored and championed as was explained in the earlier scenes, why did everyone just sit there doing nothing while she was cursed? Merriweather scrambles to fix the curse, admitting her form of magic isn’t as powerful as Maleficent’s, changing the evil spell to sleep, instead of death. Why so passive, everyone? Because Maleficent is formidable, and people are terrified. Pardon me, but that’s hot.

We flash forward to teenager Aurora, (who is in hiding under the name Briar Rose, as a curse-avoidance strategy) walking in the forest, casually belting out some operatic tunes. We spend about two minutes with her before she meets the Prince and they launch into song together. We don’t know her, who she is, what she’s about, what she wants. There’s simply no one there. My buddies and I found ourselves checking our phones, getting up to hit the kitchen for snacks, as the movie droned on. It wasn’t until Maleficent appeared again that we were drawn back to the couch. Telling. A few weeks before, we had watched “Cinderella”, (1950) and had been glued to the TV, sighing with pleasure at her songs, clutching our blankets in horror when her stepsisters ripped her apart. We knew Cinderella, because from the beginning she had a personality, dreams, and ambitions. Briar Rose wasn’t capturing us in the same way.

I fixated on the deft way Maleficent swept away each obstacle to her ultimate goal–destruction of Aurora, and ownership of the entire kingdom. She would stop at nothing, had endless spells and ideas for how to advance her agenda. I want to make clear I’m not celebrating evil, or wishing the triumph of darkness. It’s more that if given the choice of whose qualities to emulate, outside the context of good and evil, I’m with Maleficent every time. She’s a woman of action, moving fearlessly in pursuit of her ambitions.

I remember in high school dealing with crushingly low self-esteem and self-destructive tendencies and identifying with Maleficent. I wanted to see all happiness and love around me destroyed, because I was so miserable. I needed everyone to be at the bottom with me. And when friends and I had a nostalgic conversation about which Disney princess we would want to be, I said Maleficent, because I just didn’t identify with happily ever after. As an adult, I completely identify with her goal-oriented, fearless and confident approach. She was willing to get her hands dirty to achieve her ends, willing to die, even. She didn’t sit in her castle whining about what she was going to do to keep the Prince from kissing Aurora, she built a massive thorny hedge around the kingdom. And when that wasn’t enough, she turned herself into a dragon and fought that dude herself.

Watching her go up against the Prince was riveting. She was all purples and blacks, green fire streaming from her mouth, gnashing her teeth and towering over the tiny man. (The story may not hold up, but the animation is astonishingly beautiful in its stark simplicity and saturated colors). Maleficent was the epitome of perseverance, caring nothing for her public image, taking bold action, laser-focused. She died for what she wanted. Meanwhile, the good fairies shrunk themselves down to miniatures and flitted around in the shadows, trying to do damage control without getting caught. Without their magic wands they were a trio of doddering, unskilled elders. Where’s the inspiration in that?

I turned to my buddies again and again excitedly asking if they saw a strong female role model in Maleficent. I was amazed by her powers, dazzled by her confidence among such a lackluster, bland group of women on screen. They looked at me like I was crazy. “But she’s so mean,” they kept saying. I was clearly on my own in understanding her outside the realm of good and evil, imagining her using her powers for something better, and how unstoppable she’d be. I would want to be her, hands down. I don’t want her isolation or bitterness. But I do identify with her ability to rise above social convention and flex her will to get her way. I’m impressed by her cleverness and creativity in changing form to manipulate the situation to her advantage. She schemes and strategizes, crafting ingenious solutions to reach her goals. Don’t CEOs of Fortune 500 companies do it all the time? Her mind is focused, her resolve strong. And given the choice of being Aurora, who sleepwalks through life, allowing everyone around her to dictate her future, no principles, no personality, just a lovely face and singing talent to guide her, well, I’d choose to be Maleficent every time.