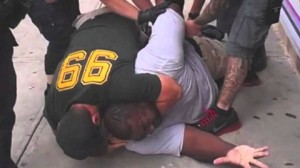 My carpool buddy and I had left work early that late-August day, hoping to avoid the miserable, inching gridlock of Seattle summer traffic. About a mile from our respective apartments we came to a complete standstill, not moving for a period of many minutes. We checked our phones to find the cause of the delay and found reports that the Seattle Police Department had shot a suspect to death, just blocks from where we sat, a half hour earlier. The report began to fill in, as the afternoon and evening wore on. The shooting was a confrontation of a single suspect by a single cop. The suspect was a known street inebriate, a man in his 50s, of Native American descent. The cop was young, white and in his late 20s, rather new to SPD. The suspect had a name–John T. Williams–and a family tradition of woodcarving. He had been crossing the street, using the crosswalk, head down, a chunk of wood and a pocketknife in his hands. From this point, I will refer to Williams as the victim, because I believe very strongly that SPD Officer Ian Birk chose to murder him that afternoon.

Williams had been living on the streets of Seattle for many years, struggling with severe alcoholism, hearing loss, and eking out a meagre living selling his woodcarvings. Seattle has a large population of transient individuals, and you begin to recognize the faces of the homeless who dwell in the neighborhoods where you work and live. I can remember arriving for early-morning opening shifts at the GAP on Broadway, a street populated by many people dealing with homelessness, mental illness and addiction. The cops would shake these folks awake, or tap their feet to rouse them from doorways, offering a ride to detox. It seemed like a sensitive way to manage potential clashes between business owners and people without stable housing. I assumed that SPD officers were familiar with the street folks on their beat, getting to know them over time, their personalities and behaviors. If I knew some of their names and many of their faces, their lines for soliciting money, the substances they were using and parts of their stories, didn’t SPD, whose job it was to serve and protect the citizenry? I assumed they would know the people on their beats well, allowing them to more accurately assess threats and respond safely and appropriately .

Why then, did Birk, after cruising along on a beautiful August afternoon, feel the need to pull over and leap out of his car when he saw a frail, homeless man, head down, slowly crossing the street? For what purpose did he begin yelling “drop the knife!”, firing multiple rounds and killing Williams within four seconds of getting out of the cruiser? Because a vulnerable person of color was carrying a small pocketknife while crossing the street? I believe that Birk got up that morning with the intent of murdering a person of color. His actions chilled me, and shook me to my core.

As a middle-class white woman, I’ve had the privilege of viewing the police as my protectors, feeling safe and secure in their presence. When I’ve called, they’ve shown up, giving me the benefit of the doubt, listening intently to my side, guarding me. I have zero concept of how it feels to be profiled, menaced, stopped and searched. I’ve basked in this privilege. Birk’s fatal shooting of Williams that afternoon shattered my perceptions of SPD as “peace officers” and forever changed my feelings about police.

Watching Eric Garner’s strangulation by a New York City police officer over the summer sent shivers of revulsion through me, taking me back to that afternoon in 2010 when I lost trust in cops. Here was evidence of cops continuing to choke-hold an individual (who struggled with severe asthma) suspected of a petty, victimless crime as he struggled for air, saying repeatedly, “I can’t breathe”. For what purpose did Daniel Pantaleo push Garner’s face into the concrete sidewalk, choking the life out of him? Because he suspected him of selling individual cigarettes? I believe that Pantaleo got off on exerting his power as a law enforcement officer, abusing it, stopping short of nothing, not even murder.

The documented incidents of police using lethal force on unarmed, young, old, vulnerable people of color seem to be happening in a tidal wave of excessive violence, yet I think this is nothing new. I think now that nearly all citizens have video and photography equipment in the palms of their hands at all times, we’re seeing a stark reality that has always existed. The 24 hour news cycle and the ability to upload images to social media in seconds are showing what has always been: an utter lack of common humanity. In other words, our society has drawn illusory lines between individuals and groups and we’re selling ourselves on the idea that we’re not all human. That some groups are worthy, special, important and valuable and others aren’t. That some groups can’t be trusted, are guilty until proven innocent, and must be killed to avoid a perceived inherent threat to other groups. It’s so dead wrong it makes me sick. Even with our big brains, we’re too stupid to meet each other with common respect and dignity, thereby acknowledging all lives have value.

I struggled with whether, as a privileged white person I had a right to write about my feelings and reactions, in light of the Ferguson, Missouri grand jury’s decision not to indict police officer Darren Wilson for shooting MIchael Brown to death. I didn’t know if anything I said would have any gravity or accurately express how disgusting I think our society is, for treating non-white citizens like garbage, and worse. Right now I feel like nothing has improved, that we’ve made no progress as a species, simply running racism, fear, resentment and bigotry underground. It rears up, showing its hideous face and convincing me humanity is too fucking stupid to ever be better. This is why I’m an atheist, and in my most pessimistic moments, this is why I think the sooner humanity is wiped off the face of the earth, the better. If not all lives matter, then how do any lives matter?

1 thought on “I Can’t Breathe”