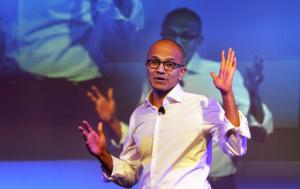 Last night Microsoft CEO Satya Nadella presented at  a “Celebration of Women in Computing” conference, urging women during the Q&A not to ask for raises. When the question was posed him, he replied, “It’s not really about asking for the raise but…having faith that the system will actually give you the right raises as you go along.” Apparently he added that not asking builds good karma, silence being a special superpower of women in the workplace. Let’s add this item to the long, long list of things no one would ever say to a man.

Gender income inequality is real. Gender opportunity inequality is real. And both are well documented, in the tech sector, for starters. I spent five years working in Seattle’s technology sector and noted the gender disparity in entrepreneur, technologist and executive groups. The large majority of each group was men, specifically white men between the ages of 20-60. Women seemed largely to hold administrative roles, minding the shop. I can point to endless examples of men being accorded special privileges and access their women counterparts are not.

I once worked at an organization that sold technology innovations to companies. A male colleague was hired to help manage intellectual property assets, and within six months was attending professional school (during business hours) on a full tuition reimbursement and receiving a materials stipend for books while being paid full time wages and benefits. A female colleague who had been at the organization for several years approached management about receiving tuition reimbursement for a professional school program and was denied. Within one month of graduation, my male colleague left the organization for a higher paying job elsewhere, his new degree as paid for by our organization paving his way. Things that make you go, hmmm…

At a different organization a painfully out-of-touch female colleague remarked that having to settle for an administrative assistant role must have been a “slap in the face” for our male 22 year-old new college graduate receptionist. Her comment was a slap in my face. It had felt like a major victory when at age 26, with a newly-minted masters degree, I at last broke out of retail sales into an administrative assistant role. But of course men aren’t expected to use (waste) their education in an assistant’s job. Even the young ones with no experience.

During the beginning of the Great Recession I was working in research at a university. Funding was drying up and we’d all been given our layoff notices. None of the men at our organization received one. A colleague friend and I, both with graduate level educations and years of experience both began to receive the entirely sexist advice to find ourselves new employment as executive assistants somewhere. It was the first time it dawned on me that no one would ever recommend a similar course to a man facing unemployment.

One night I attended a panel discussion about the rise of the gaming industry and the implications for startup investment. The panel was entirely male, and made up of several major players (pun intended) from the sector. The moderator was a female tech journalist and blogger who was introduced as the “sexiest woman in technology”. Her marital status was then alluded to, in the context of her unavailability being a shame. None of the male panelists’ sex appeal or relationship status had been discussed, their introductions instead outlining career achievements and innovative contributions to the field. It was a shockingly, revoltingly sexist moment, and no one said a word. Later, a panelist took to Twitter to challenge sexism in the tech industry, but that did nothing in the moment.

When heads of major corporations are publicly telling women that the key to income advancement is keeping quiet, trusting in faith and karma to increase their pay, we’re living in the dark ages. In the workplace, men are expected and encouraged to push for advancement, to vocalize their opinions, to expect privilege as their due. Nadella’s remarks brought the sexism deeply embedded in the job market into full view. Now women have the notes on how to get ahead: use our superpower (silence) to rack up enough karma points, which can be exchanged for money, through a quiet faith. To speak up, speak out, self-advocate would destroy the delicate process by which the gender income inequality is being fixed.